This has been a famous quote in mountain-hiking. As for me, as I enjoy Christmas vacation, I had this privilege to escape from the noise of the metropolis to my escapade at Batangas. The stay highlighted a youthful motive: to hike Mt. Maculot – our resident mountain.

Shooting two birds with one stone, the three-day stay started with the event of a friend’s house blessing and then an unplanned/unorganized/unforeseen trek towards the mountain. I thought about hiking early in the morning of the 30th but since there was this unanimous decision while I was snoring on the bed, we hiked late afternoon of the 29th right after the blessing took place.

We knew that leaving late afternoon would mean that we would reach the peak early evening of that same day. We brought extra shirts and consumable supplies that were necessary for the hike. One necessity foreseen was bringing flashlights since we knew that it would be a late-evening hike down the mountain, but we didn’t take it seriously and so we hiked without any. Actually we thought about ‘divine providence.’ Seems foolish since we defied our foresights right? Anyway, we continued the adventure!

Going up was already tiring and exhausting. Halfway towards the peak, the sunset as if told me that no light would be provided for on top – doubling the effort to hike up is necessary – it was already getting dark. A companion, Kuya Gary led the way to the top. He stopped for a while and called me. Responding to him, he instructed me to turn back and try noticing the trail. I was surprised to see nothing but dark silhouettes. I smiled and said, ‘That was nice, you should have said it earlier.’ Then we went on. Upon arriving on top, we rested for a while. We met co-hikers fully equipped with everything for an overnight stay.

An idea came to us about the possibility of staying since we were tired, but it was too cold up there, no one would survive the night without any fitting equipment. We were tired but we knew that we needed to go down and follow the plan for the day – go down without any flashlights. Good enough that we brought our mobile phones with us, the light might not be strong to guide, but it was the only option to survive. Down the mountain we went, the should-have-been thirty-minute hike down became two hours. We crawled like babies, walked like toddlers and despaired like prisoners. We kept the faith by singing all the melodies we could think of though not the world could imagine, all songs that could kill time, all genres that anyone could think of. We made it to the foot exhausted and almost desperate, but we knew that it was a thrilling, exciting, and memorable experience to be banked on our hearts.

At the end of the day, the famous quote was not realized except for the last line.

Thank you Alan, Jesser, Kuya Gary, Igy, and Iman for being my companions during this very unique experience. It was my privilege to be with you.

For the past week, we’ve been discussing differences in relationships. They could be categorized in four general fields. We call it L.I.F.E: Love, Infatuation, Friendship, and Exploitation.

Let me focus on love. Love is commonly believed as a give-and-take relationship, but actually it’s never like that. It’s unconditionally a give-give-give relationship. “Nemo dat quod non habet.” Nobody gives what one doesn't have.

An example could be like this: I cry because I broke-up with my girlfriend, but to whom am I really weeping for? If those tears are for me because I feel emptiness in me, therefore I have not loved but more of infatuated since am only attracted to her presence. I feel the need of her presence masked by so many other created reasons. Life is not worth living since she left me here all alone. This is never love but infatuation.

The love I project to others is the love I have for myself. This is the same quality of love that one could give to the other. And so, love could only be realized if one is overflowing of love for himself. All the rest of love pouring out from him could be given to the other with the assurance from him of being stable and capable to love always.

Christ Revealed in the Disabled

It was a grace-filled experience to be part of the People with Disability (PWD) Day in Don Bosco Makati last Sunday, Dec. 2, 2007.

I was a volunteer caregiver of three recipients: Kuya Abe and Kuya Ed who were both lame, and Rochelle who has down-syndrome. I was with them the whole day. Honestly, it was really difficult for me to be a caregiver since am not patient; nevertheless we acknowledged the presence of one another. At the end of the day, we have to separate ways, and say our goodbyes. That ends my task for the day.

It was a tiring day. I did my duty, but at the end of everything, am faced with many questions before the Lord. I did my duty but was I able to “be” with them: to touch their lives for a moment, a moment that could be treasured for a lifetime? Was I able to share my life or just my time and my physical presence? I felt that I missed the point of that day since I looked at it as a mere duty. Perhaps, this also gives me the reason why I respect guardians taking care of disabled people.

I am guilty and at the same time grateful. I felt that I wasn’t able to bring Christ to them; otherwise they brought Christ to me. It shakes me to realize these matters. After that Saturday, my affection for the disabled people sinks to the reserved section of my heart. It was my pleasure being with you Kuya Abe, Kuya Ed, and Rochelle, for God is with you. Thank you for the presence. Thank you for bringing God with you. 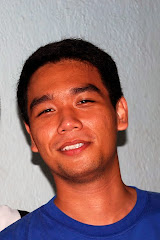